Conflict not only takes human lives, destroys communities and erodes development gains, but also leaves a legacy of fear, hostility, and trauma. Without effective, inclusive peace and reconciliation processes, countries are likely to revert back to violence.

MRF works to create and support youth dialogues as an initiative of peace building, these dialogues were conducted voluntarily in puntland regions period between Jan- to -Dec 2013, these dialogues was attended by more than 315( 165 boys & 150 girls) youth members.

During these dialogues the facilitators introduced various aspects and dynamics on peace through dialogue exercise the use of open discussion by asking participants to sit in pairs and have a conversation with each other, face to face.

The facilitator chose questions, perhaps ones which preferably reflects on the nature of the day’s module and posed the questions to the group; repeated them several times, giving 10 minutes for the deliberation.

In responding to the question, participants focused on conflict from their own surrounding with which they are familiar or they may choose to focus on a general point.

I.      Promoting civic and political participation of youth

Youth in Puntland face poverty, barriers to education, multiple forms of discrimination and limited employment prospects and opportunities, they can be a creative force, a dynamic source of innovations, and they have undoubtedly throughout history participated, contributed, and even catalyzed important changes in political systems, power-sharing dynamics and economic opportunities.

MRF conducted trainings to increase youth political participation, First we trained a group of 10 young trainers as TOT’s in order to train other youth groups in Puntland regions to increase youth political participation. This trained TOT’s reached 1,000 youth members in Puntland regions especially in all regions of Puntland State of Somalia.

As the results young people established Puntland political parties in 2014, when Puntland government for the first time allowed multiparty.

The facilitator did introduction on child rights where he started by explaining on who is a child?  He explained that it is anyone below 18years of age. He also discussed on the child rights where he mentioned on the survival rights of every child, the development rights, participation rights and protection rights. He also elaborated more on the what children fully needs to develop potentially, he disclosed that through love, feeding, clothing, giving learning opportunities and protection from exploitation, children will grow to be happier and develop maturely and become beneficial to themselves and the society.

He went on to discuss on the child abuse and their effects, he categorized all the abused, such aspect as physical abuse, emotional abuse, sexual abuse, neglect, child labor, sexual exploitation, child recruitments and trafficking of children were deliberated upon, effects of child abuse were also discussed such as physical damages, psychological damages, learning damages, emotional damages, developing delays and continuations of abuses.

Group discussions was used to deliberate on child abuses that exists within community and solutions that may eliminate or reduce the abuses, The audience participated fully on the existing abuses and on their possible solutions.

He named one of the problems where a big percentage of children work as bus touts, waiters and house help rather than going to school. He recommended that they be given shelter, good education and prevention from child abuse. He said juvenile courts should be established to judge children with mistakes.

The participants contributed their views where they said that children should be taken to school, given shelter and taken well of. They affirmed that the government should play a bigger role in addressing all the children issues by coming up with policies and legislations. He also added that organizations and sheikhs should visits the rural villages and spread the child rights messages.

They finished by saying the children’s health, education and livelihood should be taken as their first responsibility and it should come from the family, teachers and general community at large. Various activists groups recommended for distribution of leaflets and posters with messages on child rights protections. They also added that community mobilizations should be heightened and strengthened and be done more often to allow people be aware of children’s rights in all aspects of life.

Puntland children lack adequate shelter, healthcare, education, protection and guidance, Drug abuse is common and many are involved in activities such as pick-pocketing to cover drug costs.

MRF Social workers in the field say insecurity, drought and economic hardship have forced an unprecedented number of children on to the streets, which put them vulnerable to child trafficking, exploitation and abuse for these reasons MRF organized voluntarily African Child day held in Garowe and Badhan districts and presented community problems and challenges faced by children this has forced them children which caused children to be in Puntland streets without protection, help.

900 people were attended these events, the results was community accepted their roles and government also accepted and each group promised to play his/her role improvement of the situation of the children in Puntland.

After over 20 years of war and conflict Somali children have been robbed of a childhood and many have been displaced from their homes in other parts of the country.

During the event the kids presented several kits; songs, poems, drawings, drama/role plays and eventually performed a Somalia national anthem which received a standing ovations from all the participants.

MRF in collaboration with other protection/human rights organizations brought the use of the media, influential leaders and decision makers at different level to spearhead an array initiative to prevent violence against women.

Therefore, awareness raising sessions focused on rape and domestic violence through community discussions on what are the root causes of these issues, the contributing factors and existing mechanisms to support response. 3044 (1702 female \ 1342 male) community members took part.

IEC materials with GBV advocacy messages- earlier developed were used during the session and distributed afterward.

In Dangorayo ,  MRF organized football tournaments as a channel to pass GBV messages to wider community crowds that come to watch the matches reaching more than 500 people. Local media talk shows were also organized with opportunities of feedback calls by listeners. There was interest of public in GBV discussions.

Similar forums were organized in Bossaso and Galkacayo with participants of 30 and 20 respectively. These forums provided a plat form where representatives from different parts of the community and district/regional authorities have got a meaningful discussions and exchanged ideas on issues affecting women especially GBV.  Some of the forums like in Ayl issued statement at the end, others participants unanimously agreed to support all efforts towards reducing violence against women.

On 10 December 2019, MRF commemorated the International Human Rights Day in Bossaso and Garowe districts in Puntland State of Somalia. The aim was to raise awareness about gender based violence as a human rights issue at all levels, and to strengthen community awareness campaigns to change negative attitudes towards violence against women and girls.

Two days public forums on the subject were conducted in Bossaso, and Garowe more than 100 people from various parts of the society participated in it including women, girls, students and youth, religious men, Statement of eradicating violence against women was issued by the end of program.

08 December 2019, the MRF organized youth study circle, an interactive session where young people could have discussions with issues that have impact on their lives. The aim of these sessions was to localize the campaign in a more youth friendly way and to engage young people as agents of change. These discussions looked at youth as both victims and perpetrators. Group rape, which always done by young people from same neighborhood took center stage of their debate, One of the concrete outcome for these study circles were youth to organize themselves in order to mobilize their peers and community on the matter.

You may also enjoy these articles 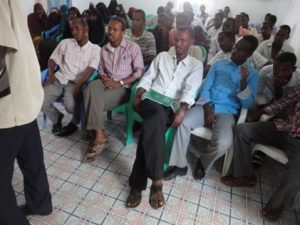 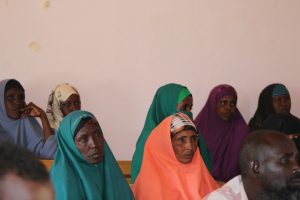 Description of the Project: The on-going crisis in conflict, insecurity, drought, and floods an estimated 2.6 million people has been in Somalia, is yet again 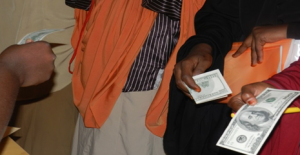